Thinking about exploring the theatrical side of Beantown? We’ll help you make a night of it! Everything from transportation, to dinner, to ticket purchase, to after-show-drinks is all planned out for you in this step-by-step guide.

This week – find out why fans of American Horror Story, devotees of 24, and collectors of Swarovski figurines will all enjoy the A.R.T.’s The Glass Menagerie. Also, discover the best Cambridge restaurant you’ve never been to, and cap off your night with a villain of Old English poetry fame.

Tickets to the American Repertory Theater’s production of Tennessee Williams classic The Glass Menagerie are going fast, and with good reason; rumor has it that this production might be moving to Broadway shortly after it ends its run on March 17. Translation: this show is not to be missed, unless you’d prefer to take the Fung Wah down to NYC and pay some outrageous ticket prices there.

This one’s a gem, Beantownians! Here’s how to make an entire night of your trip to see The Glass Menagerie:

First, the bad news: like animals escaping from a poorly-tended zoo, tickets to the weekend performances of The Glass Menagerie are flying out of the box office. The good news? There are likely to be tickets available for the weekday shows (no shows on Mondays, however). Now, the BEST news: you don’t have to pay full price for your ticket. Those with a valid student ID may do what’s called a “student rush.” On the day you want to see the show, call or visit the box office anytime after 12 PM (I’d recommend earlier rather than later) to reserve a $15 student rush ticket. Your valid ID must be presented to claim your ticket, one ticket per ID.

Of course, if you’ve got the cash to spend (early tax refunds, perhaps?), you could buy regular-priced tickets through the A.R.T.’s website.

“The Glass Menagerie” is being performed at the A.R.T.’s Loeb Drama Center, 64 Brattle Street, Cambridge.

Driving:  I wouldn’t recommend it. If you’re headed in for dinner (and you should be, see “DINNER,” below), you’ll be hitting rush hour traffic. And who wants to drive in Cambridge during rush hour? If you’re dead-set on driving in, both the Propark at the Charles Square Garage and the University Place Garage offer some pretty sweet coupons. You can find other parking deals through the A.R.T.’s website. Your friends will think you’re such a savvy parker, and your wallet would thank you, if wallets could speak.

Taking the T: Definitely the recommended mode of travel – take the Red Line to Harvard Square. On your ride over, figure out which of your friends has the best Boston accent by saying “Harvard Square” over and over again. Don’t mind the people starting at you.

Suggesting the perfect restaurant in Harvard Square is like enjoying Russell Crowe’s performance in the movie Les Miserables – it’s tough to do. If I have to pick just one, though, allow me to suggest Orinoco. 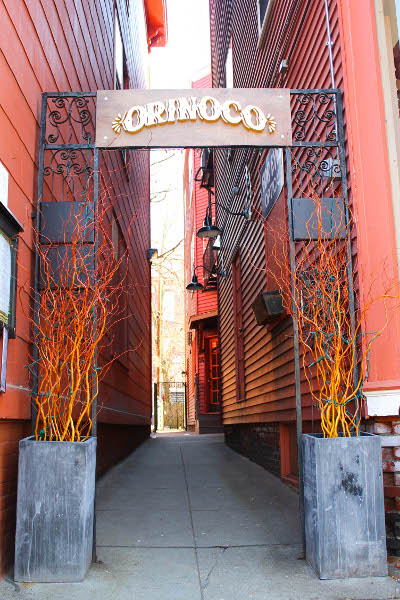 Never seen it before? That’s because it’s tucked down an alley located at 56 JFK St. Walk down that path and enter a Venezuelan flavor fiesta (warning: vegetarians and vegans won’t really feel welcome at this palette-pleasing party, very slim pickings for them). Start with a glass of sangria; for appetizers, try the arepas, little corn cakes with some delectable fillings (my favorite is the Guayanesa); then, select your entrée from “Platos Principales,” which is basically a list of animals slathered in delicious sauces and grilled to perfection. Stay away from the “Platos de la Casa,” or signature dishes, as they’re a bit pricey (albeit delicious). No need for dessert – nothing too special there, plus you’ll already be pleasantly full.

Leave yourself about ten minutes to walk to the Loeb Drama Center from there.

Make sure you arrive at least fifteen minutes before curtain (for you non-mathematicians out there, that’s 7:15). You don’t want to be that couple that has to crawl over eight people to get to their seats as one of the actors passionately pours through a monologue.

If you have to arrange to pick up your student rush tickets, do that before dinner – it’s a huge stress reliever on you and the box office.

As for the show itself, I’ve written you a brief synopsis: This moving portrait of a fatherless family is narrated by the son, Tom (played by American Horror Story and Heroes hunk Zachary Quinto); he tells the story of how his devoted yet angst-ridden mother (Cherry Jones, aka President Taylor of 24 fame) longs to find a suitor for her daughter, Laura (Celia-Keenan Bolger). This seems increasingly impossible as Laura’s physical impairment and her anxiety keep her indoors, where she tends to her collection of crystalline animal figurines (a glass menagerie, if you will). The story gets complicated when Jim (Brian J. Smith), a coworker of Tom’s, starts to show interest in the shy, insecure girl.

Intrigued? I sure am. Enjoy the show! Make sure at the end you applaud, even shout “Bravo!” if you’re feeling moved to do so. Throwing a single rose at either of the lead females would also be appropriate.

Of course you and your friends will want to discuss what you just saw, and what fuels a discussion like this better than a drink or two? There are plenty of options; my suggestion would be to head over to Grendel’s Den, right on Winthrop Square, a mere hop, skip and a jump away from the theater (alternatively, you could walk).

Grab a table and enjoy their interesting array of cheap-ish beer; also, do yourselves a huge favor – as you discuss the stunning performance of Cherry Jones as a faded southern belle/doting mother or the possible autobiographical undertones in Tennessee Williams’ writing, do it over the spinach, artichoke, and crab dip.

When you’re finally ready to go, bundle up and head outside. The T, the bus stops, and most of the parking garages, are less than a ten minute walk away.

There you have it – a fairly cheap, accessible, and delicious night at the theater. Your friends will think you are super cultured, and rightfully so. You can now consider yourself a patron of a Beantown theater – don’t forget to pick up a schedule of the A.R.T.’s upcoming season on the way out the door. An added cultural bonus: you now know what an arepa is.