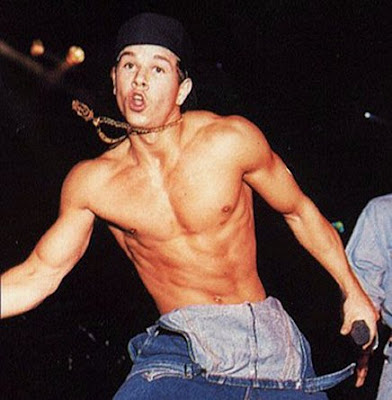 Marky Mark Mondays. It’s one of those things you can look forward to opening your week. While Mark didn’t make an appearance at last week’s One Fund concert, (Donnie was out in full force), Beantown can embrace the funky legacy.

Don’t stop there. Dig that Lou Reed bass line sampled from 1972’s “Walk On the Wildside” that runs underneath the Funky Bunch’s “Wildside.” This song made the rounds. Credit is due, because that bassline is swinging. Yet, A Tribe Called Quest’s “Can I Kick It?”, also from 1991, also utilizes this bass sample. Was this on a producer’s mixtape that made the rounds around studios?

A Tribe Called Quest’s song punches harder, adding extra snare to emphasize the second and fourth beats. Meanwhile, Marky Mark plays with the pitches and modulates keys, moving from C# in the verses to C after hitting the lyrical hook (and nicely keeping the saxaphone solo and “doo doo doo” girls).

There are, of course, added drums on “Wildside” too, but it retains much of the original song’s groove to the detriment both works. It sounds as if a group of friends are freestyling over the original rather than inventing a new song. And what lyrics are these? The narrator tells a fearful story of student Annie seduced by Billy, a drug dealer that introduces her to an unnamed smokable drug. Annie not only loses valedictorian status, but is now also suicidal. I swear the lyric is “a former valedictorian / ends up the ‘Top of Fourstoryan'”, as in, Annie is contemplating jumping off a four-story building. Just say no, kids. Second verse: Ron finds a “faster way” to make money outside of the nine-to-five, though the narrator doesn’t go into detail. Regardless, Ron ends up a “victim of homicide / because he chose to walk on the wildside.” Watch out kids!

The third verse is the most fully developed of the entire song, to the point where it might have deserved a song in itself. The narrator describes Charles, a man who’s got it all, being the victim of a burglary and murder of his wife. The crime is pinned on a neighbor via racial prejudice, but it turns out Charles and his brother planned the caper as an insurance scam. It’s a little bit Double Indemnity, a little bit Before the Devil Knows You’re Dead. The point of racism and classism causing people to be “put through a lot of misery and wreck” is valid and appropriate. But the message is done a disservice to be stuck in the middle of the song with a ridiculous revelation of the insurance scam (“Whaddaya know? Sure as a seagull is web toed, Charles was the culprit.”)

As I listen and relisten to “Wildside” I think more about another forboding, morbid song from the early 1990s that actually has some heart: “Waterfalls” by TLC. There’s an enduringly poetic way to describe and warn against drug abuse, sickness, and violence instigated by inequality and an unjust system. And make it groove.

Enough with that. Watch the background on Herbie Flowers, a London session bassist, who conceived of double-tracking bass on Lou Reed’s 1972 recording. Based on appearances, he is the least likely musician to contribute an iconic riff to the history of rock and roll. In fact, I think I just saw him at high tea last week at the Fairmont Copley Hotel. But also watch when he plays over his original track, and you see him get into the pocket around the 1:14 mark.

Stay tuned for more Marky Mark Mondays and subscribe to the Song of the Day playlist for grooves on the go.